A dizzying display of tech trends

On the final day of the Consumer Electronics Show (CES) 2017, I was in the elevator at my Las Vegas hotel and noticed a bedraggled man wearing a conference badge. I asked him how he enjoyed the conference. He looked at me with tired eyes and said he was absolutely overwhelmed. Like me, it was his first time to CES and he could only withstand a half day for two consecutive days. He told me that he felt there was just too much of everything and no order to any of it. He slumped in the elevator until we arrived at his floor; then he shuffled out and I assume went to bed.

At that point I felt as if I was in an elite class of humongous conference attendees as I withstood three full days of the assault and was not staggered yet. However, I sympathized with his assessment—too much, too disorganized, and too chaotic. In my view it was a bizarre high tech bazaar.

With thousands of exhibitors that range from vendors who put LEDs on bike helmets to builders of minivan-sized drones combined with 170,000-plus attendees, even the most junior of journalist could manufacture a trend or a theme for the conference that would instantly be declared valid and possibly insightful. That gives me some peace of mind as I provide my own observations and takeaways with respect to:

What is the big focus of the consumer-oriented tech?

Who is/are the biggest players in the market? 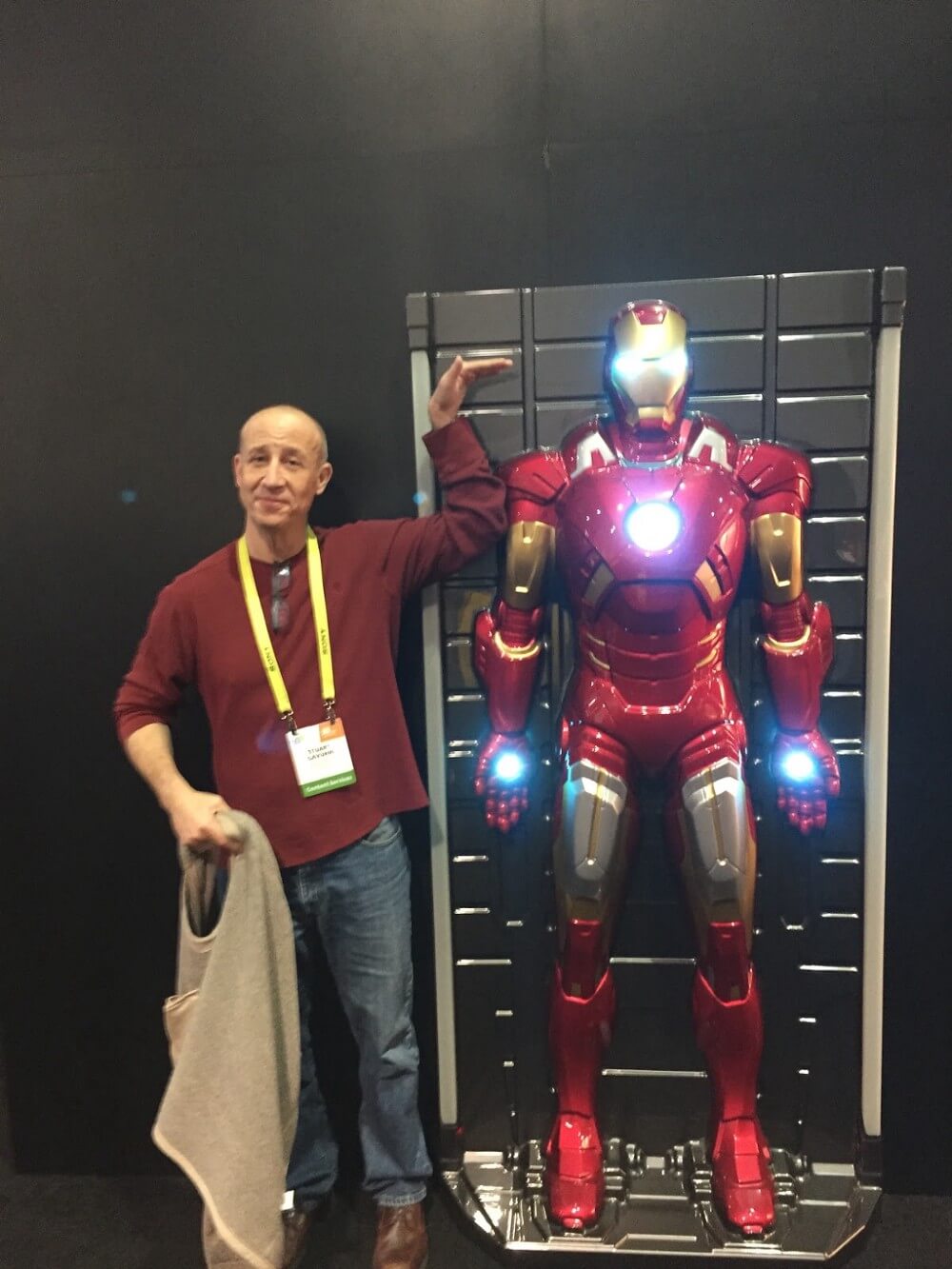 As this was a consumer-oriented show it could be argued that everything was for the retail buyer. In actuality the consumer world can really be divided into the average consumer, the hobbyist, and the extreme tech show-off. My focus is mainly on the average consumer because otherwise I’d be speaking about futuristic cars, fish finding underwater drones, and the ability to build your own robot from 3D printed parts.

This was the 50th year of the event and like the 49 before, the main theme for the average consumer was entertainment.  This category included hundreds of virtual reality (VR) goggles that each had a nuanced differentiator but clearly VR is mainstream for gaming, experiencing new video content, or for virtual tourism.  A close second was headphones thanks to the advent of VR and the loss of an earphone jack on iPhones. VR and great headphones go hand-in-hand for escapists, but audiophiles were also a focus as top fidelity is now available at reasonable prices for audiophiles or travelers who just want noise cancellation.  Lastly, a major entertainment item is phenomenally thin video screens/TVs.  I didn’t measure all of them, but many of the video sets had glass that was no more than 1.5 inches in width for TVs that were over 45 inches diagonal.

Outside of entertainment, consumers are ready to have “smart” anything.  Primarily the focus was the smart or connected home.  This is far greater than the initial market players of Nest and Phillips (Hue).  Nearly a third of one of the conference floors showed a vast variety of connected doorbells, door locks, lights, home entertainment, refrigerators (yes the Internet fridge), garage doors and wine racks.  This is also where I witnessed the greatest use of voice-based interactions with Alexa, Google, and Siri.  The smart world has also extended to cars and cities, but for me the big “priced for now” solutions are in the home.  Sonos, Amazon and Spotify will likely end up in some sort of smart home cage match for music based on what I saw.

The final category in the consumer space is the continuation of the wearable “thing” for the active lifestyle.  Yes, there’s all the Fitbit-like stuff but there’s now all sorts of sensors in workout gear from Under Armour, Nike, and the rest.  Apparently everyone needs to track their extreme pursuit of world-class athletics.  Wearable security was also prominent as I must’ve seen a half dozen vendors with videos showing women running alone and alerting their friends and authorities about danger.  This is actually a good thing for all of us—a nice extension from tracking steps and pulse.  The last notable wearable items for actives were for personal safety from drinking alcohol and UV rays.  Several vendors had clothing that tracked UV and a few had bracelets that warned you about being drunk.  I guess we can’t count on our moms and our friends the way we used to.

I apologize to anyone who wanted to see a discussion about car tech here.  There was a ton of it, but to be honest I think it’s best to just be in Detroit during the annual Auto Show (actually this week) to learn about all of that.  However, every car manufacturer of note was there with super sexy cars, automation and gadgets.  The best of which was lip reading consoles which allows automated cars to understand the driver when the car’s speech system can’t hear them.

As I’ve stated, CES is a show about the consumer, but there were a lot of enterprise executives walking the floors.  There were also quite a few exhibitors whose technology was only tangentially related to consumers’ needs.  The enterprise caliber tech included specialized drones, robotics and automation that supported industrial manufacturing, and chip and electronics companies appropriate for top end enterprise electronics.  There were quite a few in this last grouping including Microchip, Intel, and Nordic..

The world of 3D was the most prominent business to business (B2B) technology category from my perspective.  Most interesting among the 3D world was the array of cameras and scanners that can capture 3D images for use as either content for entertainment, or importantly, input for modeling devices.  For the latter, consider a Tony Stark-esque scanner that quickly and relatively inexpensively scans an object and produces a 3D image that can then be sent to a 3D printer or be used by a CAD system or a designer. 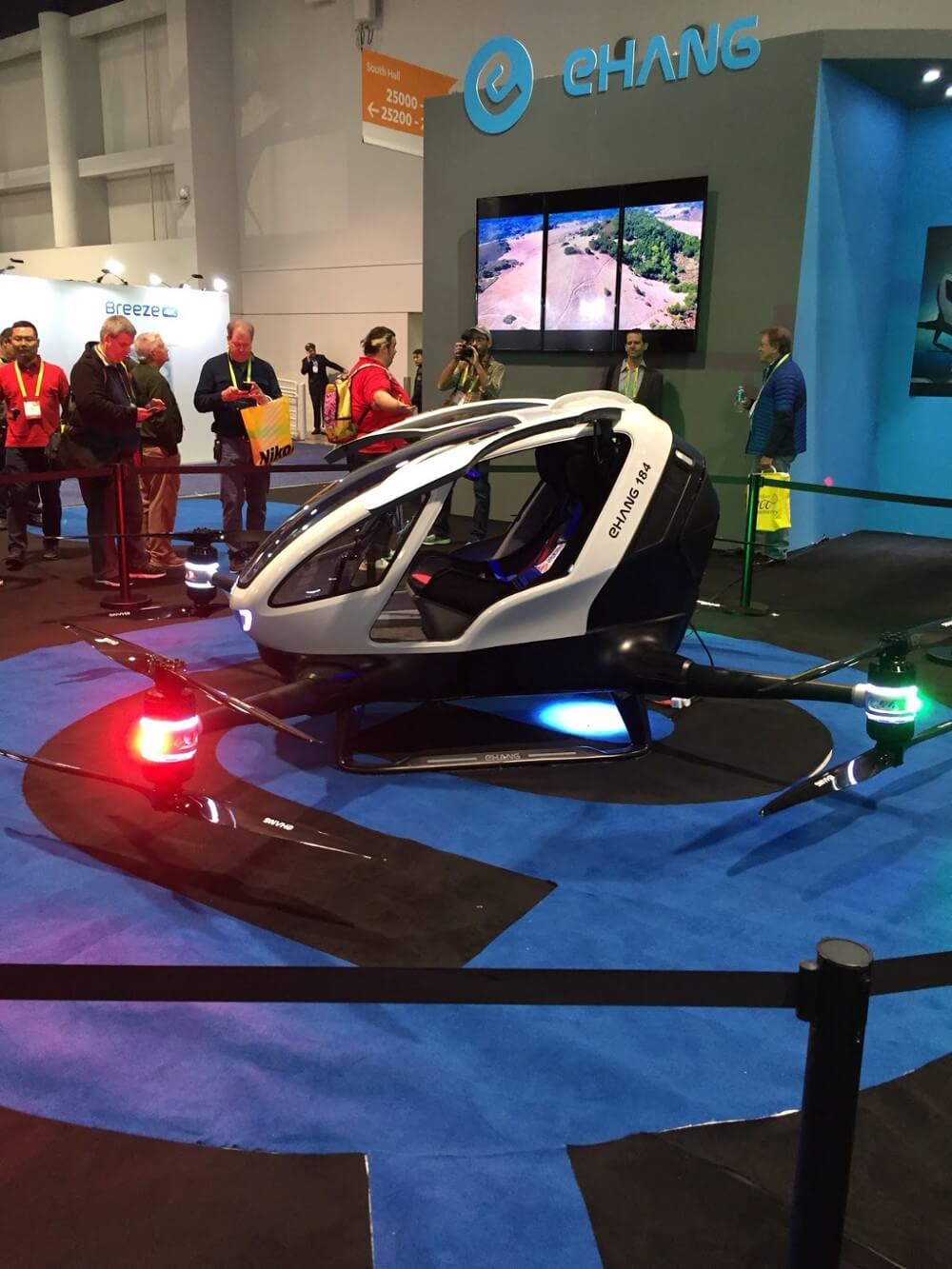 Drones were the next big player in the B2B space.  Although there were quite a few consumer drones, there were hundreds of drones meant only for commercial use.  These drones included those that specialized in capturing data for the agriculture industry (think infrared as well as other specialized cameras) and others that were perfect for helping with the fish industry (fishing and fish farms).  Also there were a few drone companies who were brash enough to state that their product was optimized for spying.  These looked like birds versus quadcopters. 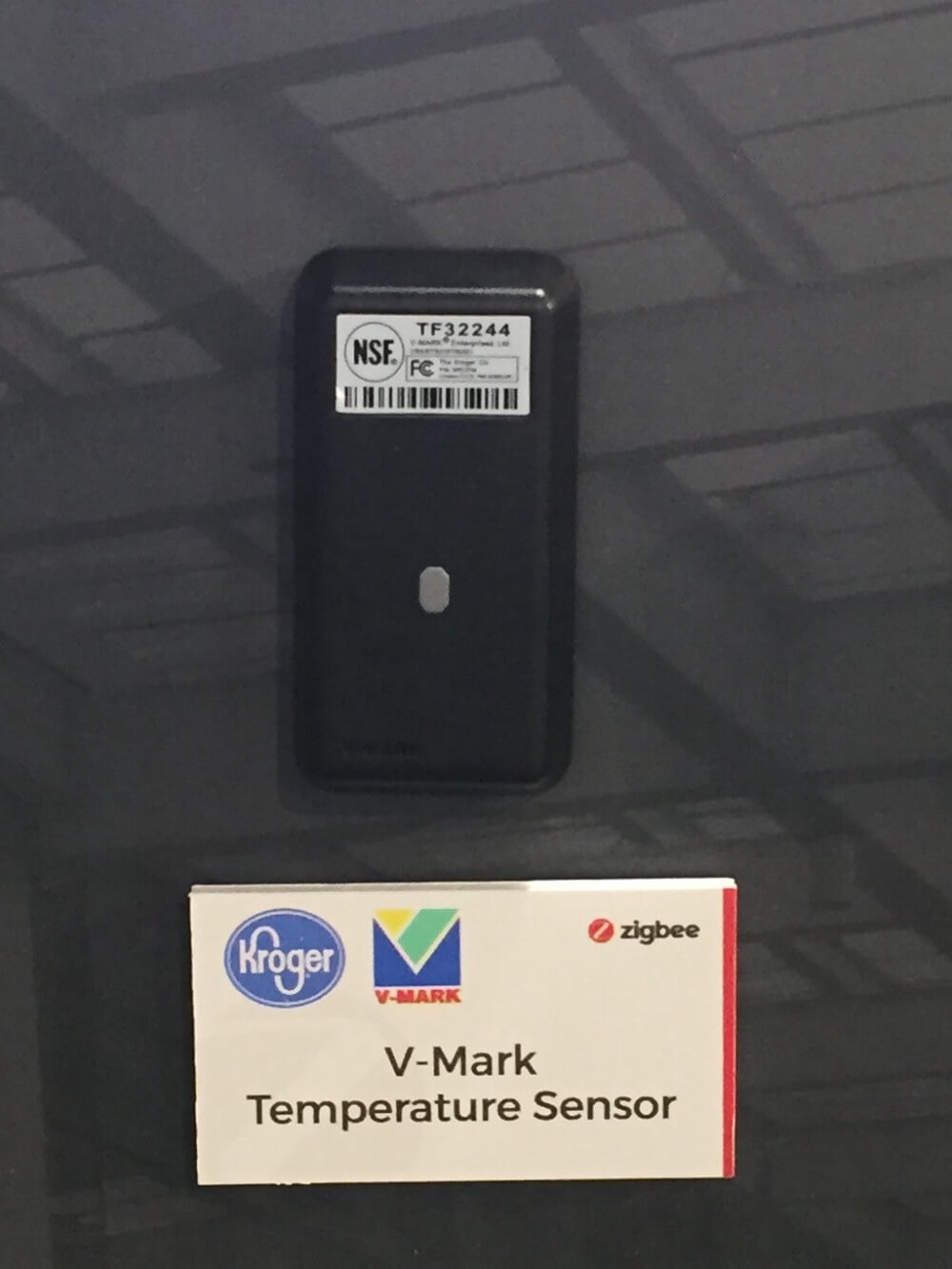 Spotted in the wild at the ZigBee Alliance booth: TempTag, core to our IoT solution for Kroger.

The chip and electronics players were quite interesting in that they were at CES for two purposes. Their exhibits were typically situated near the consumer product companies in which their electronics were implemented. Broadly, this aspect of their participation showed that they are fully supportive of the home automation, entertainment, etc. players who had pledged fealty to the electronics company’s standards and components.

However, the major reason they seemed to be at CES is that it was a very convenient place for them to meet and potentially initiate deals with other businesses that would use their parts. We visited Microchip, who graciously walked us through their electronics supporting IoT, healthcare monitoring, and hardened touch-based interfaces. The latter are specialized interfaces that can interpret gesture and touch in less than optimal conditions such as rain or when people are gloved (e.g., industrial field force). The team there was quite knowledgeable and spoke about B2B solutions and the product engineers were clearly scheduled for business meetings in their set aside meeting rooms for other large business buyers.

The interactions with these companies were most informative as they broadly spoke to their major capital and R&D investments. If I go back to CES, I’ll continue to spend time with the component companies. 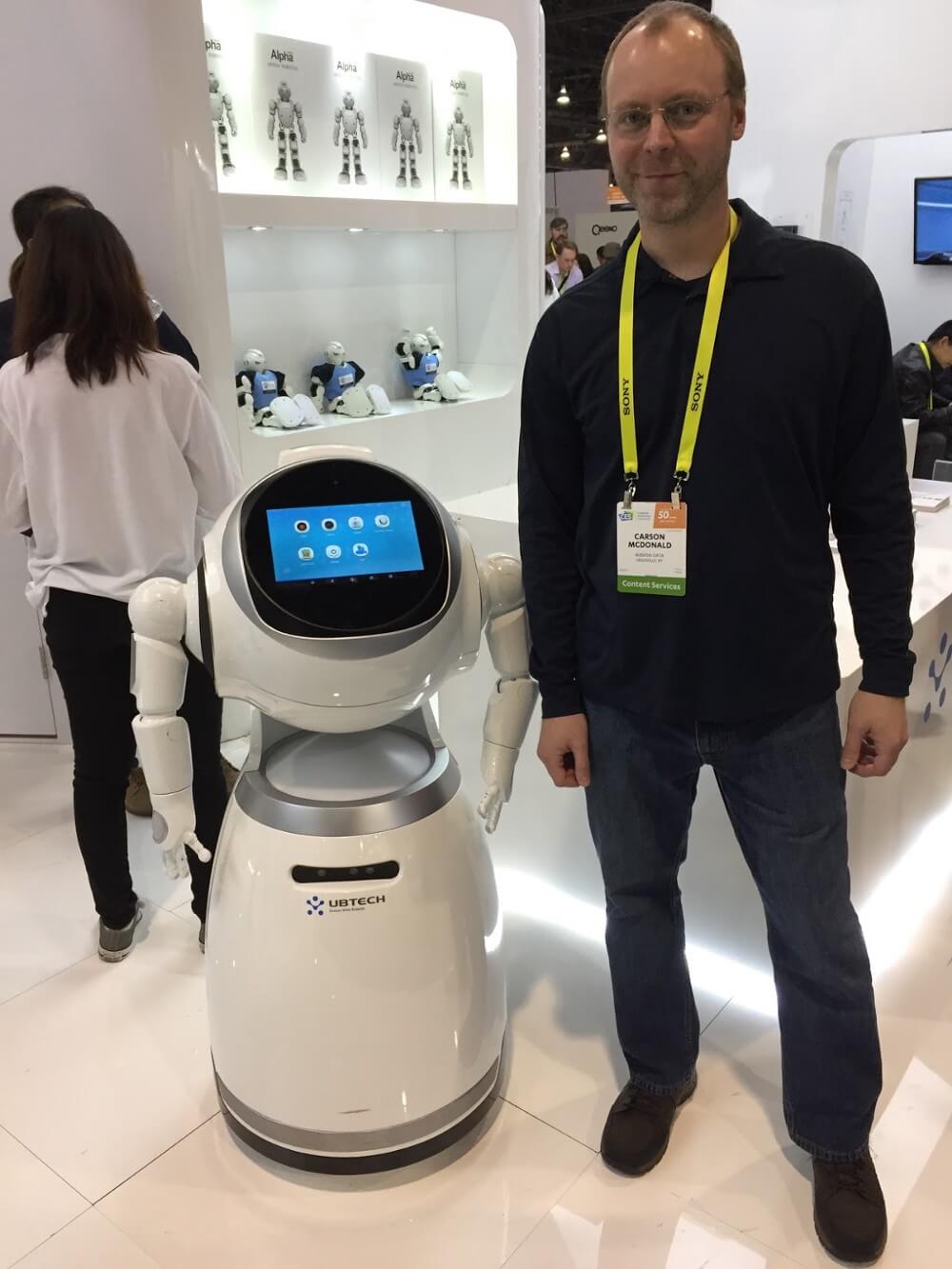 The answer is China. Unlike other conferences where one sees major brands and identifies which company will dominate a technology or services space, the presence of Chinese companies, small and large, was impressive. Just about a third of all exhibitor space included small booths from Shenzhen and other provinces that offered the ability to design, spec, build, and assemble anything your electronic solution needed.

My colleague and I couldn’t figure out why you’d choose one vendor over another, but as we were walking through yet another endless aisle of sensors, monitors, VR glasses, circuit boards, cables and other electronic gear, we realized that this was truly a bazaar. Buyers would either meet someone via some earlier established introduction or one played the game and went from vendor to vendor to negotiate the best deal for an OEM solution. It was high tech, but it still gave the vibe that you get from a booth at an open-air market. Vendors calling out to you to grab your attention to potentially haggle out a deal for an order of 5,000 units of whatever electronic need you have.

China has an impressive industry going and they clearly are putting their full force into making sure consumer and business electronics are affordable and accessible. It was the biggest takeaway of my experience.

CES is quite an experience and one must be hardy enough to deal with the sensory overload. It’s best to go with a colleague, mainly to allow you to keep your sanity and to make sure you understand the nuanced differences between what looks like identical solutions or product.

The entertainment space is the big money play and clearly the most competitive. However, the world of IoT and inexpensive sensors is enabling what seems to be quite a bit of competition in the areas of activity monitoring and the smart home.

Big business is hovering behind the scenes and China—yes, China—is in charge of the bazaar and making the electronic future possible for us all.