Our Creative Director looks for takeaways from the voice-first event 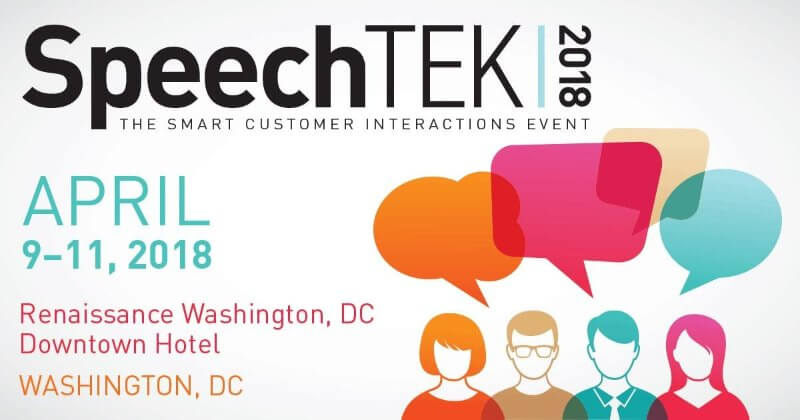 I recently attended the SpeechTEK conference for the first time in Washington, D.C., an event focused on deploying speech-based solutions for business applications. I went to the event with Stu Gavurin, Mission Data CEO, who had attended previously, but for me, SpeechTEK stood out from other conferences in several ways. I attended because I wanted to have a broader understanding of the voice world beyond building consumer-facing skills for Amazon’s Alexa. I do think I achieved my goal, but it took some work.

Unlike other industry conferences such as An Event Apart, Breaking Development, or Circles, which allow you to take away a lot of information around a particular topic (like design) while still covering a number of different areas (research, user experience, visual design, etc.), SpeechTEK is hyper-focused on voice. The sheer amount of information on this one particular topic did leave me a bit weary by the end.

In particular, the conference focuses on customer service and how voice interaction fits in, which required a bit of a mental leap for me to draw value out of every discussion. Company case studies, which made up a reasonable amount of the talks, were in areas that aren’t exactly relevant to how I might use voice interaction in a potential project. For instance, capturing notes and action items from a conference call is interesting, but I would have preferred a broader overview of best practices.

The customer service focus also meant that the speakers assumed that I knew a bit more than I did. There was use of terms and talk of technologies or protocols that were foreign to me, but I was likely the only one in the room for whom that was the case. Even so, I was able to pick up some interesting insights to think about that when stitched together began to paint a decent picture.

For me, the most interesting part about attending SpeechTEK was learning about some high level things that I hadn’t really thought about or even knew to consider. I suppose it’s fair to say that I thought I knew a lot more than I did. I thought to myself “how complicated can this be,” and the truth is there are opportunities to use voice to solve problems in interesting ways if you go beyond the typical Alexa/Google smart assistant use cases and explore things like advanced natural language processing and artificial intelligence.

Voice interaction has been around for a while now in various forms, but consumers are becoming more familiar with how it might benefit their lives in their homes or at their jobs. Advances in natural language processing and recognition are affording strategists, designers, and developers new ways to think about and implement voice-based solutions instead of screen-based ones. While there is talk of AI and voice replacing screens, I don’t know that I really believe that. There are too many things that people just don’t want to do with their voice depending on the task, scenario, level of privacy needed, etc. I do believe screens are on the decline and things like voice can augment or replace current experiences for better ones, but most likely we are going to be left with a world where we use different technologies and hardware for different purposes, just like today. How we use those things and where they are located in proximity to us is likely going to make our connected world a whole lot more interesting.