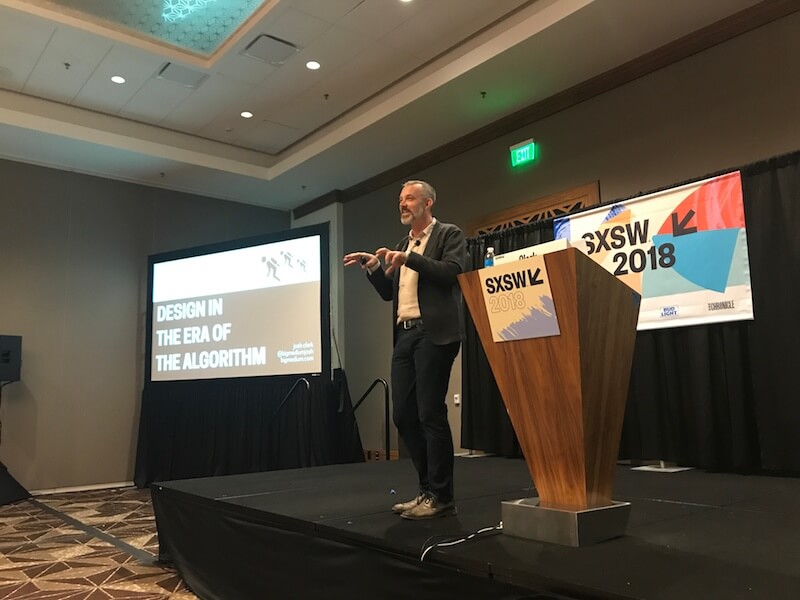 We’re learning lots about the latest tech trends and science discoveries in Austin for SXSW Interactive 2018. Check out Day 1 here. Read our daily conversations and keep up — who says you need a badge?

Stu:  Today was the first full day and the team is a little tired. Sitting there and getting spoken to for hours on end is like…well…school. It can be pretty rough. Instead of every session, let’s share the best and maybe the worst.

Going clockwise (even though you can’t see us), I’m going to start with Todd. What was your favorite?

Todd: Actually, this is pretty hard to answer. There were definitely two sessions that didn’t make the cut, but the other two today were top notch. I’ll pick Design in the Era of the Algorithm with Josh Clark (photo above). I’ve seen Josh talk a handful of times and he never disappoints.

Stu: I saw him a couple years ago and he sort of changed my view on UI and UX. I still replay his demonstration of gesturing where he gesture “grabs” a laptop screen and pushes it onto his smartphone. Some highlights?

Todd: Josh is such a good speaker and always gets you thinking. He’s got me thinking about the role of humans in machine learning and algorithms. It hurts my brain a bit to think about who is really influencing the information we are getting from computers, digital assistants, and structured data.

Stu: I think I get it. The computers and the algorithms are pure logic and that logic is biased by humans and the sources that the humans point the algorithms to consider. Kind of a dark thought if the wrong people start the process. Right?

Todd: Right, and a problem with us humans is that we’re impatient for THE ANSWER rather than to dialogue and get to the truth. Computers are input/output and might need to slow down to make sure they understand the intent of the actual question or request for information. As Josh said, “An answer of ‘I don’t know’ is better than an incorrect [or skewed] answer.”

Stu: That thought went through my head when I saw Laura Granka and Hector Ouilhet of Google basically tell the audience that Google will be listening and helping us given the “natural, ambient, and omnipresent technology” that’s helping us out. Trust Google! I’m guessing Josh gave you a warning. I got a similar warning from the great discussion Richard Socher of Salesforce and Stanford gave on the state of AI in his “Watch Your Language. The future of AI Depends on It.”

Todd: Curious to know what someone at Stanford has to say about AI. I imagine it’s a bit different from what Google might tell you.

Stu: I don’t want to discuss that talk as Google has been underwhelming. Hector is an amazing designer and Laura clearly a brilliant engineer. It’s just that they were too corporate. They Googlesplained to us that they’ll do the hard work and we just need to be excited about where they’re going. However, Hector did state that once he realized he wasn’t a UI designer but a UX designer he considered his designs as conversations that needed to be mediated between the computer and human rather than just interfaced.

Richard Socher (Stanford guy) kind of blew me away. You can tell when someone is smart when they can explain hard things to you by simple first principles. In terms of AI, I got a few learnings that I’ll retain. It’ll be a long while before computers take over à la The Matrix. He explained the concept of “world knowledge” that humans have. Basically, it comes down to context, but he showed that even with AI, an algorithm can’t deal currently with the millions of contextual connections a human makes based on their experiential knowledge. The example was funny. A human will say, “Well it was as good as any Nicholas Cage movie.” For decades, a computer will think that’s a positive thought and Cage movies are great. Humans in the English-speaking world, well… They have world knowledge about Cage movies.

He also shared some videos of robot “fails” that were worth watching. The big thing that’s needed is data, data, data. AI is very dependent on having data; it’ll take decades to collect enough before we even get close to the start of The Matrix. Also, he basically said that saying neural networks were inspired by the human brain is a cop-out by the press. We don’t know enough about the brain to even understand its model to create algorithms that match it.

Todd: Cool, Stu. What about you Carson? Tell us what your least favorite talk was today.

Carson: My worst session was likely “Brainy Surgery: VR, AI and Robots in the OR” because the panel format didn’t seem to fit the topic well. However it was still very interesting from the standpoint of the way neurosurgeons are using recent technology to help surgical outcomes.

Stu: Tell us about the best one Carson as I don’t want to hear about how making a mistake could kill or paralyze me.

Carson: I would pick the “Digital Fabrication: Will Robots Build the Future?” session as my favorite. It had a couple Self-Assembly Lab MIT people that went over their work with 4D modeling in different mediums.

Stu: What was best about it?

Carson: I think the best part was the discussion of phase shifting in 4D printing. The example given was printing with rocks using strings although they referenced printing using transitions from solid to gas and liquid to solids as well. The video of the rock printing display can be found here: https://vimeo.com/141097712

Stu, is there anything else you want to share?

Stu: I think I’d like to partner with Todd on this one. We went to “Alien Worlds: NASA’S Quest For Life.” The four scientists were incredibly articulate and engaging and played off each other well. I might add that like yesterday, women scientists were the majority of the presenters.

Each scientist had his/her own view of where we’d find life. One thought it was on Europa (moon of Jupiter). One argued for the methane-based moon of Saturn called Enceladus, and the last went for a planet in another solar system. It was a science throwdown.

Todd: Yes, the content was cool, the people were passionate, smart, and engaging. But I think my favorite part was hearing from Robert Hurt, a Visualization Scientist. I immediately became 8 years old and said, “I want to be a Visualization Scientist when I grow up.” His job is essentially to take hardcore data from the geologists, chemists, and other scientists who give him raw numbers and hard-to-interpret data and turn it into something that the general public can not only understand, but find engaging.

Stu: He knew his science super well. A CalTech guy if I recall who almost giggled when he showed us how he had to alter the visualizations of the exoplanets of the Trappist solar system once they got more data back. As an oversimplification, his approach felt like two truths and a lie (hypothesis) where the way they present visualizations is to consider the absolute facts, eliminate the absolute “untrues,” and then include some visuals of some hypotheses to make a consumable rendering. Hard stuff.

He basically was the moderator and like the other three, incredibly insightful. He looks like someone on TV or the movies. Who is it that we thought he looked like?

Todd: I’m still not convinced Greg Germann wasn’t up there on the panel. As an Ally McBeal fan there was no mistaking Robert Hurt for Richard Fish: 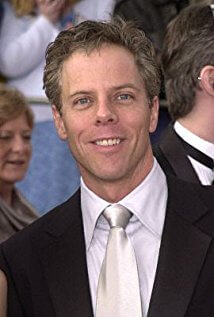 Stu:  We should end this but I want to speak about the energy of the scientists. They not only were passionate but I could sense their incredible imaginations which lead them to their discoveries. The chemist was trying to help us understand that although “her Saturn moon” had methane, it had liquid and potential thermal sources that could result in life forms that are what we see here. Basically microbes based on different biochemistry. I can’t think like that, but at the same time she’s sharing she does mountain unicycling.

Todd: She and the others certainly were passionate and interesting. They loved sci-fi too.

Stu: Yup, they made Star Wars references like pros and emphasized the writings of Arthur C. Clarke from his book 2010. They credit him with being a solid scientist but spoke of the Prime Directive. To not influence or change another world and not to have that other world change the Earth. They were incredibly passionate about making sure no mission brought our microbes there or brought things back. Very cool.

Todd: Time to research what the heck mountain unicycling is and go get some dinner.