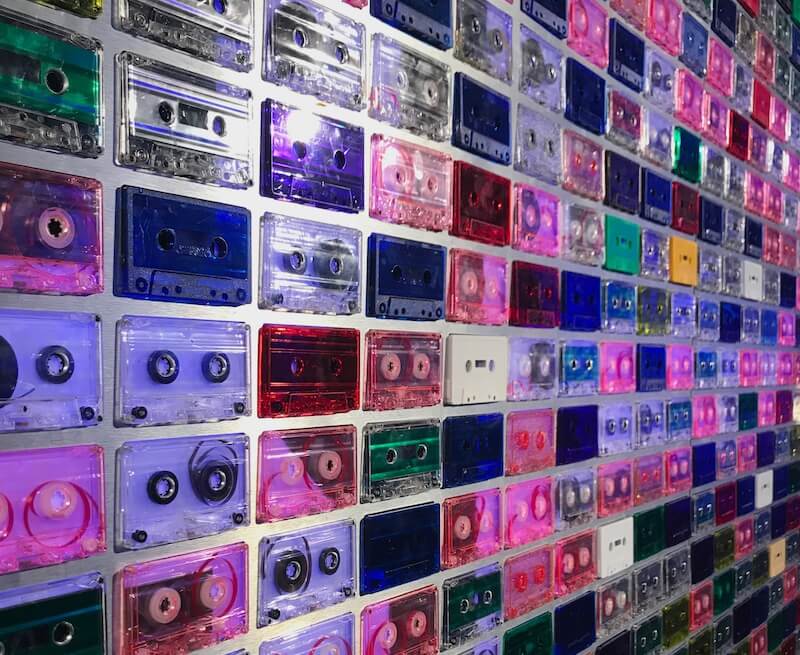 Cassette tapes live on at the Ready Player One VR Experience.

We’re in Austin for SXSW Interactive and we’re learning a ton. While Days 1 and 2 were smooth sailing, we’re starting to feel the effects of the rollercoaster that is SXSW. Hop on and buckle up.

Stu:  Well this was an odd day. Let’s just say we might’ve stayed out late the night before to when the change to DST might make an impact on waking up at a reasonable hour. The good news is that the sessions didn’t start until 11 am. I think in lieu of the usual best versus not best approach, we keep this one to name one thing you learned from each of your sessions.

Carson, let’s go with you first for a change. Give us two things you learned from two different sessions.

Carson: I went to the “Business on the Blockchain” session with the hope that they would talk about some non-currency applications. I had to wait to the end, but I did hear a little about some of the work being done around alternative proof of work algorithms that would reduce the complexity of calculations needed to implement blockchain. We have had a number of conversations with potential clients who are interested in applying blockchain to IoT, but the processing power needs have made it complicated, so it was good to hear about some of the more recent work being done to alleviate the processing needs issue.

From the “Future of Physical Retail in a Post-Digital World” session I went to at the end of the day, I learned that it is hard to come up with good cross-vertical solutions for retail. The talk was reasonable, but I found that it lacked a good correlation to the retail partners we generally work with like Kroger or Papa Johns.

Stu: Thanks Carson. I went to that last one and I’ll give my learning later but your summary is pretty much right on.

Carson: Okay Stu, you go next.

Stu: I went to “Physical Fights Back.” This was arguing that screens are an abstraction and the next evolution in UX is going to be physical. Think about the premise being speech, hearing, touch, etc. will be taking over, as after all we’re humans. The panel was a set of retailers, so their bias was obvious, but the big learning was about a non-panelist: Amazon.

The learning was that the Amazon Go store UX was based not on the use case of shopping without employees but from designing the store from the question, “What if you were stealing and not actually buying?” That perspective shift resonated.

The second session was “Data Driven Storytelling: Perspectives and Paradigms.” This was a meaty session with people I’d classify as combined designers/journalists/visualizationists. The panel included someone from The Pudding, which puts on visual essays, a UX technologist from the Wall Street Journal and now Viacom, a product director from Viacom, and an editor.

The material was fascinating in how they come up with visualizations, but the big takeaway is to make sure that the visual story of graphics, charts, etc. is highly interactive so that the user can look at the data their way so that they see the truth in the story versus the journalists’ or essayists’ bias. Basically, empower and trust the users to find their own version of the story.

You too can feel like a Jedi at the #SXSW trade show. #raycorporation #gesture #sxsw2018

Todd: I’m not sure how I can top this, but I’ll try. I wound up at two sessions today with a smattering of the trade show in between.

The first was Amy Webb’s “2018 Emerging Tech Trends Report,” which taught me that the era of the smartphone is officially over. We are now seeing a decline in purchases of smartphones compared to years past, mostly due to the fact that we have gotten to the point of incremental improvements, and people aren’t upgrading to the latest and greatest like they used to. People are ready for the next evolution in ubiquitous personal devices.

Stu: Come on, a trends talk requires at least two new learnings. Can we have another, please?

Todd: Well, at the end of the day, I wound up at “Hacking Life: The Sci & Sci-Fi of Immortality” which had some overlap with Amy Webb’s insightful information. What I learned was that in the not-so-distant future, we will all have our own genome linked to our EMRs which will allow medical professionals to tailor care and medications that aren’t specific to our symptom or ailment, but rather us as individual human beings. Imagine prescribing a medication that will guarantee not to react to you in any negative way and pinpoint the exact solution to your human problem. The end of “side effects may include”?

Stu: Okay, so that’s from both Amy Webb as a metatrend and then the second talk gives a real manifestation. I kind of love that concept. Perfect.

I went to another session about the future of retailing called the Future of Physical Retail in a Post-Digital World. Carson was there as well. I don’t feel like summarizing this session as it was really branding people who are dealing with how to handle the struggle of evolving the brick and mortar retail business.

There’s a lot in this talk we knew and isn’t pushing the envelope, but there was a moment where they gave us a real insider view when they indicated that the physical store must deliver an experience that promotes buying. The quote to remember was to make the buyer “ride the rollercoaster and then stop at the gift shop on the way out.” I think that’s actually a great summary for a strategy.

Carson do you agree? Anything to add about that session or something else you saw?

Carson: I would add that the moderator brought up that everyone should be charging for their extra retail experiences, but that didn’t go over very well. The other thing to keep in mind is that cultivating experiences is a longer-term proposition and you still need a reason to buy things in the gift shop on the way out.

Stu: Yeah, I heard that too. We have to end on that one but I will say that none of the retailers on that panel agreed with him and none are charging for the experience. The cost of the experience is totally buried in the product pricing.