We’re nearing the end of our SXSW 2018 ride, and what a whirlwind it’s been. Read on for more about the latest technology delighting our senses.

Stu: This is our last day together at SXSW Interactive 2018. Todd’s heading back tomorrow. Perhaps Todd can start with his impression of this year’s SXSW and a look at what he wants to share from the day.

Todd: My overall impression is likely going to take me some time to digest and reflect on the past five days, but as always, I enjoyed myself, was inspired, and feel that I am aware of where the digital world is today and where it is heading. Today was a nice wind-down for me. I attended a few sessions that weren’t the best of the week but kept my interest. I found a few people to follow on Twitter for their insights so that is always a plus for me. The three of us spent some time exploring the “special events” around town and enjoying the great weather.

Stu: As I went to the same sessions as you, I have to agree. Dolby’s Poppy Crum, who spoke about “A Hearable Future: Sound & Sensory Interface,” came across as an incredibly competent scientist who was going to help us learn about hearing and and wearables. Unfortunately, the session had the most AV fails I’ve ever witnessed. Her laptop lost power, they couldn’t get audio going, and her video went on the fritz when they fixed the audio. She was rushed, but I did get an impression of the ear and hearing as a primary sense. How the ear actually leads the eye and gives us a sense of space. Also, how devices can track what’s going on in the ear to gain a sense of our health and what we’re perceiving.

She hit hero status for fighting the AV and for letting us know that she’s helping democratize the world of hearing assistive devices. Basically, letting more than six companies get into the hearing game including AR hearing.

I think we should focus a bit on some of the “show and tell” we saw in displayed in the halls and at the Sony and Panasonic houses.

“FEAST” by Caitlin Pickall is an interactive multimedia installation featuring 3D mapped projections and sound and video that are triggered when people sit at different seats around the table. #sxsw2018 #SXSW #multimedia #art

Todd: I really enjoyed FEAST, a multimedia installation that was aware of who was at the table, and using a projector setup from above would present an experience on the place setting in front of you. It was a cool mix of light and sound in an interesting setting. 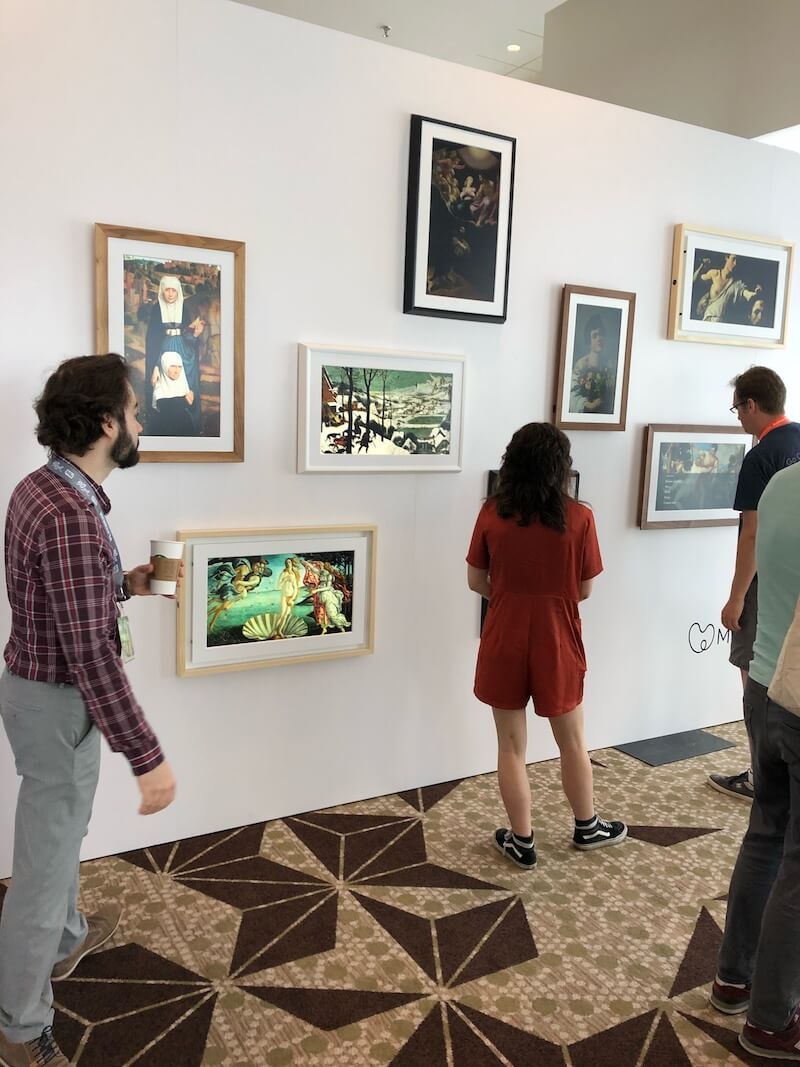 Stu: That experience was fantastic. With respect what we saw in the halls of the conference, I got a kick out Meural. It’s not that it’s simply a framed screen showing great art — it’s how detailed and real the art appeared. The gesturing to change the displayed painting or to get information on the piece was impressive.

Todd: The gesture recognition needed work, in my opinion. What else did you see?

Stu: The opposite of Meural and FEAST, with respect to experience but on the same floor at the JW Marriot, was Cisco’s Webex Board. I was led to see this during a session the other day. That session was horrible, about collaborative teams, but I figured that the product the Cisco executive was promoting was probably decent. I gotta admit, it was incredibly underwhelming.  There are large screen Android-based devices that do so much more. In a summary, the Spark Board is a video conferencing screen that allows you to do some white boarding and screen capture. Yawn.

Todd: Cool. Carson, what did you get into while Stu and I were busy this morning?

Carson: The most notable thing I did today was attend a workshop on ARKit. I have been trying to find the time to dig into it, and given the opportunity I decided now is as good a time as any to give it a try. We made it through three different examples that gave me a good idea of what can be done with ARKit. Here’s an example of what I created today:

One thing I’ll note about all the workshops I’ve been to this year is that almost half of the people come completely unprepared. Most people just don’t show up with a laptop even though they are required to really get anything out of a workshop. Others don’t come with the right software installed. If you ever attend a workshop, a good tip is to make sure you show up ready.

Stu: Well Carson and Todd, we did like the Sony House. There were a lot of interesting interfaces and a wild virtual three-person a(i)r hockey game… get it …AI. [Editor: According to a Sony press release, they’re actually pitching it as AR — augmented reality hockey.]

Sony’s Wow Studio living up to its name at #SXSW: AR air hockey, among the AR/VR fun #sonyatsxsw #sxsw2018

Stu: There were a set of speakers which could shape the sound waves they emitted to make you feel that the sounds were coming from different directions. Imagine feeling as if a baby is giggling behind you but the sound is generated by a few speakers right in front of you. So clear and disorienting. Sony termed the experience, “Ghostly Whisper.”

I loved the Sony WOW experience. Panasonic House experience was a bit odd, and although interesting, I don’t think I have anything to really share from that one. Todd or Carson anything else from our visits to Sony or Panasonic environments?

Todd: Agree on the Panasonic experience. Nothing really stood out to me much. The Sony experience had some interesting experiments and allowed you to get engaged on a variety of different levels. Viewing others participate was enjoyable, even after two visits. I think I most enjoyed the 3D sound experience Stu mentioned and the Xperia Touch projectors that let you draw on any surface.