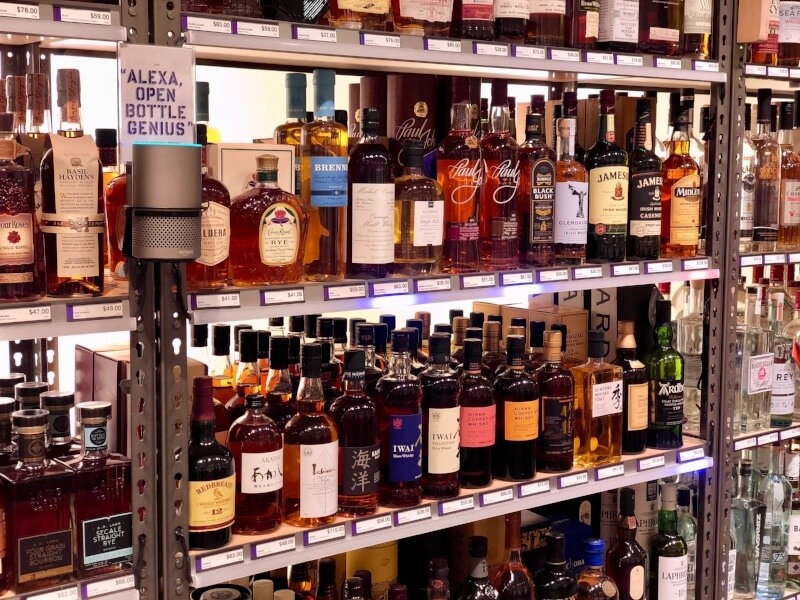 The Alexa-powered Bottle Genius at Bottlerocket in New York City.

With the start of a new year, retailers are abuzz following industry conventions such as the Consumer Electronics Show (CES) and the National Retail Federation’s Big Show. Replacing the somber mood surrounding brick-and-mortar in 2017, so far this year, the industry is focused on creating future-proof in-store experiences, buoyed by a healthy holiday season.

Big retailers such as Target, Home Depot, and Nordstrom Rack are partnering with startups to implement emerging tech such as Artificial Intelligence (AI), Internet of Things (IoT), and Augmented Reality (AR). And, of course, there was the widely anticipated opening of Amazon Go’s official public store last month. As several exciting use cases emerge in the aisles and at the shelf’s edge, retailers and customers are seeing the benefits of in-store technology.

At the Bottlerocket Wine and Spirit store in New York City, a new Alexa-powered shopping assistant helps customers choose from an ample whiskey selection. A collaboration between Bottlerocket’s whiskey experts and the Mars Agency, the “Bottle Genius powered by Smart Aisle” Alexa skill recommends whiskeys after asking simple questions like, “Are you looking for something similar to your favorite, or something different?”

A custom-built shelf features LEDs that light up to identify Alexa’s suggestions and help guide customers to purchase. For the novice whiskey shopper, the interactive service can offer an easier shopping experience, and the store gets to highlight a range of products and price points.

Kroger, one of the largest grocery chains in the U.S, announced earlier this year that it’s rolling out its digital price displays across 200 stores this year. As we’ve previously discussed, Mission Data is a longtime research and development partner with Kroger, and we helped develop the technology behind its Enhanced Display for Grocery Environments (EDGE) shelving. The fully-integrated IoT solution automates pricing changes and can also display promotional images and video, coupons, and nutrition information.

The ROI for digital price displays is especially appealing for large retailers like grocery stores, where the tech saves thousands of hours in labor. Instead of taking three or four days to change 20,000 price tags, the data is updated in minutes. Retailers can alter product pricing on the fly, based on market demands and competitors’ strategies, while also reducing losses due to wrong price.

At the NRF show, Electronic Shelf Label (ESL) maker Displaydata showed off its augmented reality demo, a collaboration with Aisle411. The demo uses a mobile app where shoppers can search for desired items, and then the app uses AR arrows to help guide customers through the store. Once users reach their items in the aisle, the Displaydata ESL delivers real-time promotional or product information. 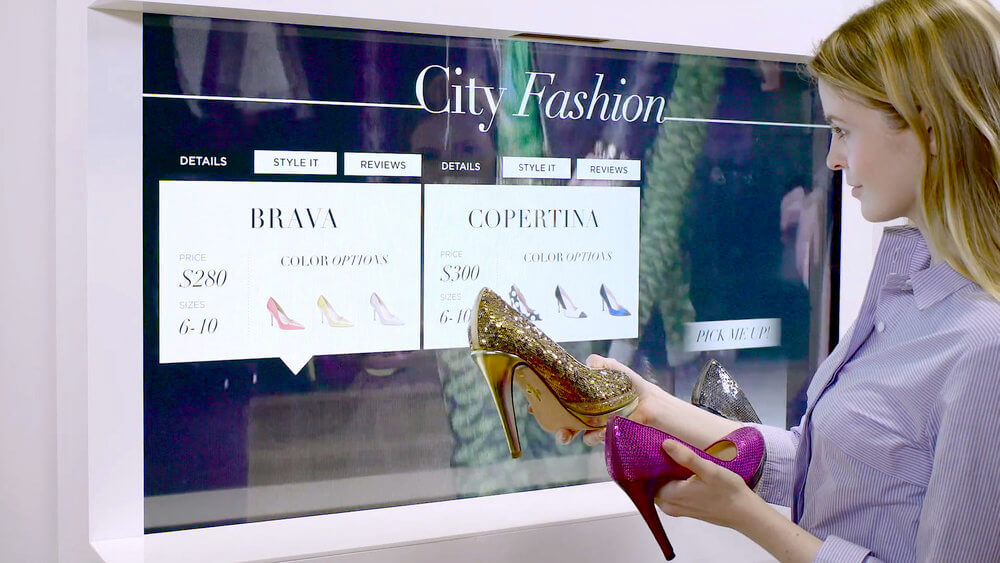 Retailers are also embracing the idea of stores as showrooms. Walmart has partnered with startup Spacee to implement mixed-reality displays to promote its selection of smart home devices. Using computer vision technology, the solution features an interactive touch display that allows shoppers to virtually browse the items without the store needing to provide extra security or worry about theft or damage.

Perch Interactive is another startup partnering with major retailers such as Neiman Marcus to deploy interactive displays using mixed reality. Its platform includes 3D camera sensing technology to detect when shoppers approach, touch, or pick up a product to launch a variety of digital experiences. The solution also offers cloud-based content management and analytics, giving retailers actionable data and insights.

Another innovation at Neiman Marcus includes smart mirrors by Memomi at its makeup counters, where shoppers can virtually apply false eyelashes and new lipstick colors without the mess of an actual application. Full-length versions of the mirrors can show consumers what the dress they’re trying on looks like in other colors, for example, and can even record eight-second videos.

No more waiting in line

After a year of testing with its own employees, Amazon rolled out its checkout-free store concept, Amazon Go, in Seattle last month. The 1,800-square-foot pilot store features a range of beacons, cameras, and other tech to allow shoppers to simply grab what they want and go, so long as they have the Amazon Go app on their phones. So far, reactions have ranged from Forrester Research principal analyst Brendan Witcher calling the store “the definition of disruption” to concerns about shoplifting and putting cashier jobs across the country at risk.

Walmart and Kroger are also rolling out scan and go capabilities this year, further advancing the trend of scan-while-you-shop using an app or handheld device in an effort to speed the shopping process.

In China, Alibaba has launched Hema, a chain of cashless grocery stores where each item can be scanned by smartphone. The stores feature on-site chefs to cook fresh seafood, 30-minute home delivery, and kiosks that use Alipay’s facial recognition-based payment.

While there’s no news of Amazon Go expanding just yet, China is expected to have 60 Hema stores by the end of this year. As retailers’ attitudes toward tech matures, the industry is moving away from flashy gimmicks toward solutions that remove friction, increase efficiencies, and build brand loyalty, with encouraging results.