Could the bar industry benefit from a dash of emerging tech? 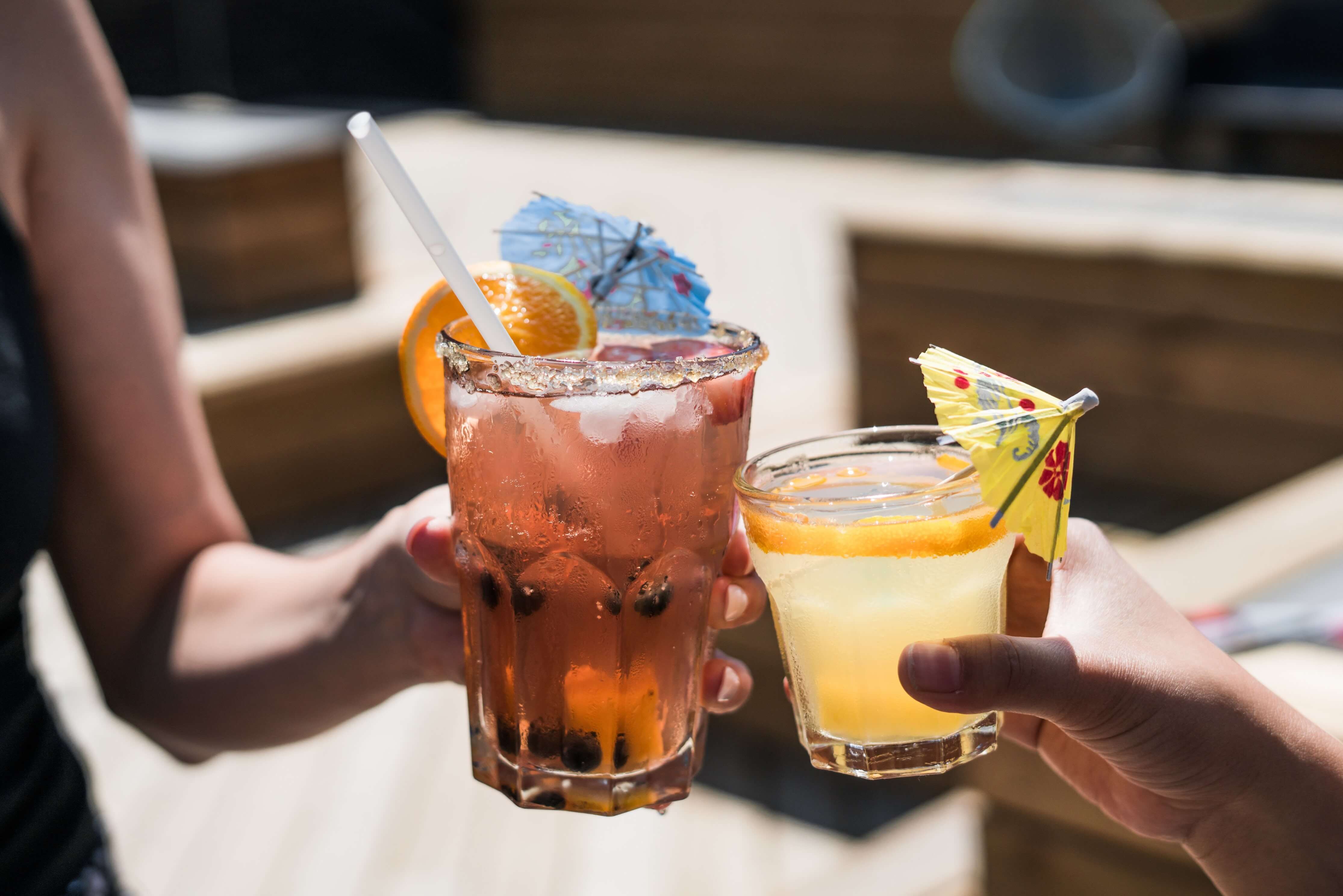 As the weather heats up for summer, those of us that enjoy an adult beverage every now and then might find ourselves thirsty for a crisp summer cocktail, like a minty mojito or a frothy margarita. Most likely, we’ll sip away at the drink while perched at our favorite bar, not giving much thought to how this little luxury arrived in front of us. And no, I’m not talking about the techniques the bartender used to make the drink—while captivating, no doubt—but rather the journey of all the ingredients, from farm to glass.

While restaurants and grocery stores are turning to tech to create efficiencies across the supply chain, the bar world is just catching on to the possibilities. Granted, foodservice companies face additional challenges that require intelligent data, including food safety compliance. But as concern grows around reducing unnecessary waste, sustainability ethos could be a pathway for the beverage industry to innovate with Internet of Things (IoT) sensors and the blockchain.

I recently attended a bar industry conference, Bar Convent Brooklyn, highlighting trends in the liquor world. One educational seminar that piqued my interest was “A New Way to Cost — Calculating Your Menu’s Carbon Footprint” by the founders of San Francisco’s Tin Roof Drink Community. Chad Arnholt and Claire Sprouse started the consultancy following the California drought of 2013. Some of their key goals for bar clients are water conservation, reducing waste, and eliminating plastic.

If you’re rolling your eyes at the thought of breaking down a food and beverage program’s impact on the mammoth issue of climate change, consider that 81 percent of Millennials (now the largest consumer demographic) believe in global warming, according to Pew Research Center. Furthermore, 94 percent are loyal to brands that offer true transparency.

Countries, large cities, and leading companies are taking climate change seriously. Alaska Airlines, for example, recently announced it is phasing out plastic stirring straws and citrus picks in favor of biodegradable versions made from white birch and bamboo, respectively. While it sounds like a small change, consider that the airline distributed 22 million of these single-serve plastic items last year. The effort could go a long way toward its overall goal to reduce its in-flight waste per passenger going to landfills by 70 percent by 2020.

So what do we mean by carbon footprint, exactly? Carbon footprint is the amount of greenhouse gases—primarily carbon dioxide—released into the atmosphere by a particular human activity. When it comes to having a cocktail at a bar, factors such as the amount of chemical fertilizer used to grow any produce used, the distance the produce traveled, the weight of the liquor bottle shipped from its origin, how much energy the ice machine used, whether or not there’s a plastic straw—can all add up to sources of greenhouse gas emissions. 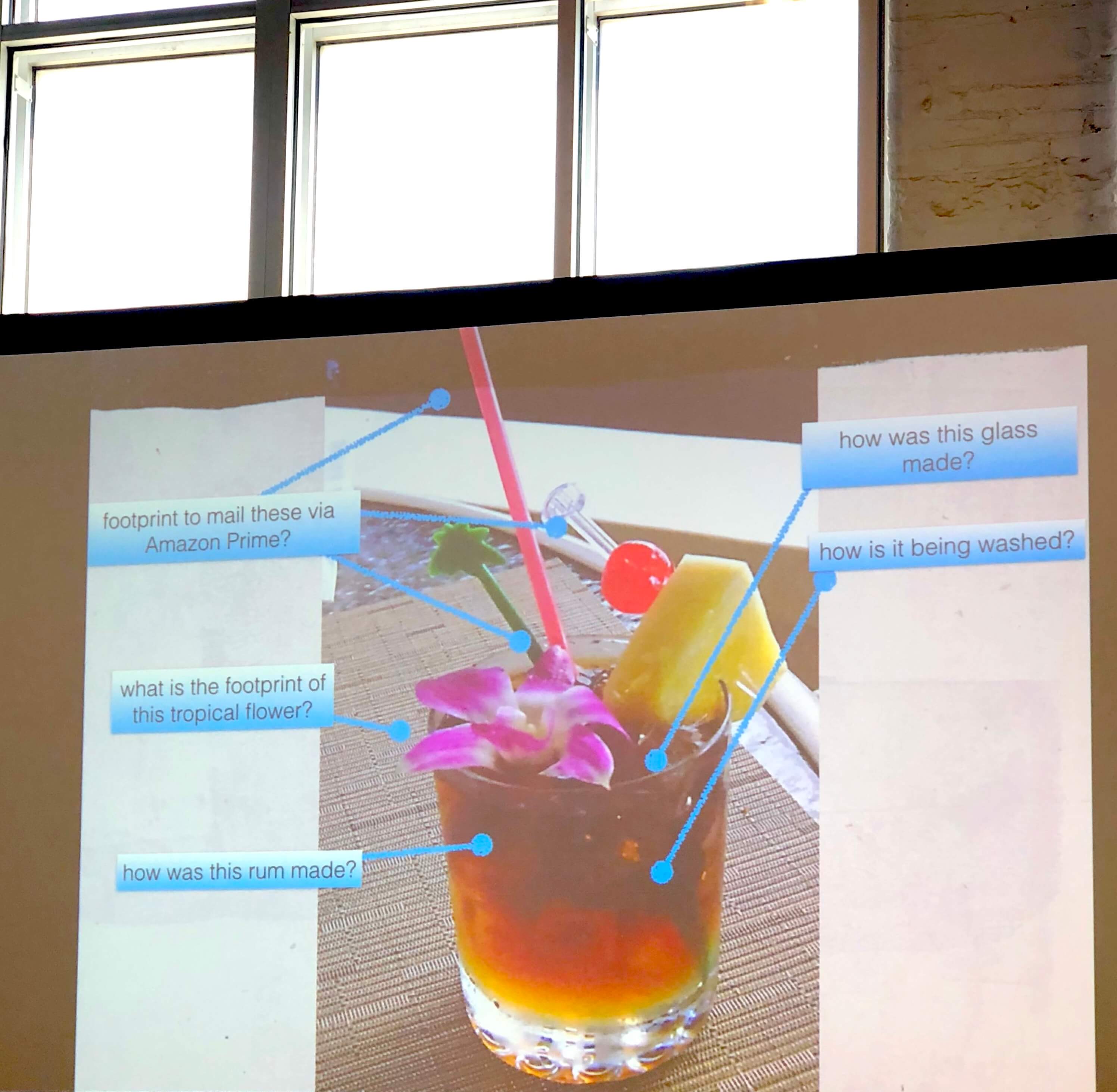 According to Arnholt and Sprouse, the average sour cocktail (like a margarita, daiquiri, or whiskey sour) has a carbon footprint of 800g CO2—or more than the gas emissions created by driving 2 miles in a car. As cocktail ingredients have become more authentic in recent years—think fresh citrus instead of bottled, shelf stable sour mix—the amount of lemons and limes being squeezed at bars across the U.S. has exponentially increased. While Mexico is producing a record amount of lemons and limes, Mexican organic lime producer Fairtrasa says it cannot keep up with demand.

First, consider the impact of the citrus fruit’s journey—let’s assume it’s a lime from Mexico, where 97 percent of America’s limes come from. As we learned during the lime shortage of 2014, limes aren’t commercially grown in the U.S. anymore. So there’s the cost of cold storage, packaging, and shipping those limes to the States. However, the biggest culprit for the carbon footprint of limes are that they are usually grown on farms using nitrogen-rich fertilizer. The history and impact of nitrogen fertilizer could be worthy of its own blog post, but if you’re interested in learning more, this article takes a deep dive.

Next, let’s consider the distilled spirit—how does the distillery manage its wastewater? Is the booze packaged in an extravagant, heavy bottle that uses excess materials? How far away is it being shipped from? Distillers are starting to address their environmental impacts head-on. Tequila Cazadores recently implemented a biomass boiler at its Jalisco, Mexico headquarters to turn distillery waste such as spent agave fibers and coconut shells into renewable energy. The tequila brand is part of the Bacardi spirits portfolio, which plans a number of sustainability initiatives, including reducing the weight of its packaging by 15 percent by 2022.

As for reducing food waste throughout the supply chain and making sure perishable inventory does not go to waste once it arrives at its destination, the bar industry could take a cue from foodservice businesses that are using technology to protect their cold chain and reduce energy.

Temperature tracking sensors monitor cold storage conditions and can alert the user when conditions fall out of range. Sensors can also monitor energy usage and even predict malfunctioning equipment. Blockchain can be used to create a single historical record and improve tracking and tracing capabilities, including data like farm origination details, batch numbers, factory and processing data, expiration dates, and shipping details. The combination of blockchain and sensor data can make supply chains completely transparent, delivering security and trust across the supply chain.

Streamlining refrigeration to reduce energy usage is not only good for the environment, but also can lead to significant power bill savings. And while grassroots efforts like Trash Tiki encourage bartenders to use leftover ingredients in creative ways (think syrups made from pineapple skin or citrus husks), there’s still a long way for the industry’s existential awakening to go.

“It’s our responsibility going forward,” said Arnholt. “This starts with all of us asking questions of the big brands.”