Walmart is rolling out scan and go at 100 test stores this year.

By now, self-checkout kiosks are a common way to complete a transaction at a store or quick-service restaurant. However, if the store is busy, it’s likely that there is still a queue to use the kiosks. As we mentioned previously in our roundup of retail trends, technology that puts the power to pay for items in consumers hands is spreading around the globe.

More than two-thirds of shoppers rank waiting in line as their top in-store frustration, according to a 2017 study by Mood Media. And according to a 2017 study from Oracle, 60 percent of global consumers want mobile payment options in-store. The wave of transformation includes voice activated payments, biometric authentication, peer-to-peer payments, and integrations with expense management systems.

As consumers grow accustomed to fast, convenient, and frictionless shopping and dining, the industry is playing catch-up to meet those expectations and provide a winning experience. To remain competitive, restaurants and retailers recognize that offering mobile point of sale for speedy order, delivery, and payment removes friction and builds loyalty.

Both Walmart and Kroger are rolling out mobile scan and go technologies this year, and other major retailers are following suit. At Shoptalk last month, Macy’s announced its plans to launch mobile checkout across all of its stores by the end of the year. Customers will be able to scan items using Macy’s mobile app (and Macy’s Wi-Fi) while they shop. Once shoppers are ready to leave, purchases can be paid for with a credit card that has been preloaded into the app. Special counters will be set up near exits where associates can remove security tags, verify purchases, and bag items.

The technology the big chains are using isn’t as advanced as the Amazon Go store in Seattle, which uses computer vision and machine learning, or as automated as some convenience stores in China, such as Bingo Box, where customers pick and pay for items without a cashier in sight. However, a completely cashierless solution would be expensive to deploy in a large store, and U.S. analysts predict we’re several years away from seeing connected stores beyond prototypes.

Many of the leading fast food restaurants (Starbucks, McDonald’s, Dunkin Donuts, Panera, Domino’s, Burger King, Chipotle, Papa Johns, Sonic) are now offering or in the process of deploying mobile payment options within their apps, but overall, the QSR industry is late to the mobile pay game.

A handful of fast-casual dining chains (Applebee’s, Chili’s, and Olive Garden, for example) offer tablets on the table for ordering and payment, and even playing video games. At sit-down restaurants, digital devices may be too distracting from the ambience, but there’s potential for frustration as the customer waits to get the server’s attention to ask for the check. Once the bill is presented, the server either has to bring the payment card to the POS terminal, or bring the terminal (if it’s mobile) to the table. Then, a paper receipt must be printed and delivered — even though that receipt is likely to be thrown out within minutes of being produced. All of this takes an average of 12 minutes per table — time that the restaurant could spend preparing for and seating the next group of guests. 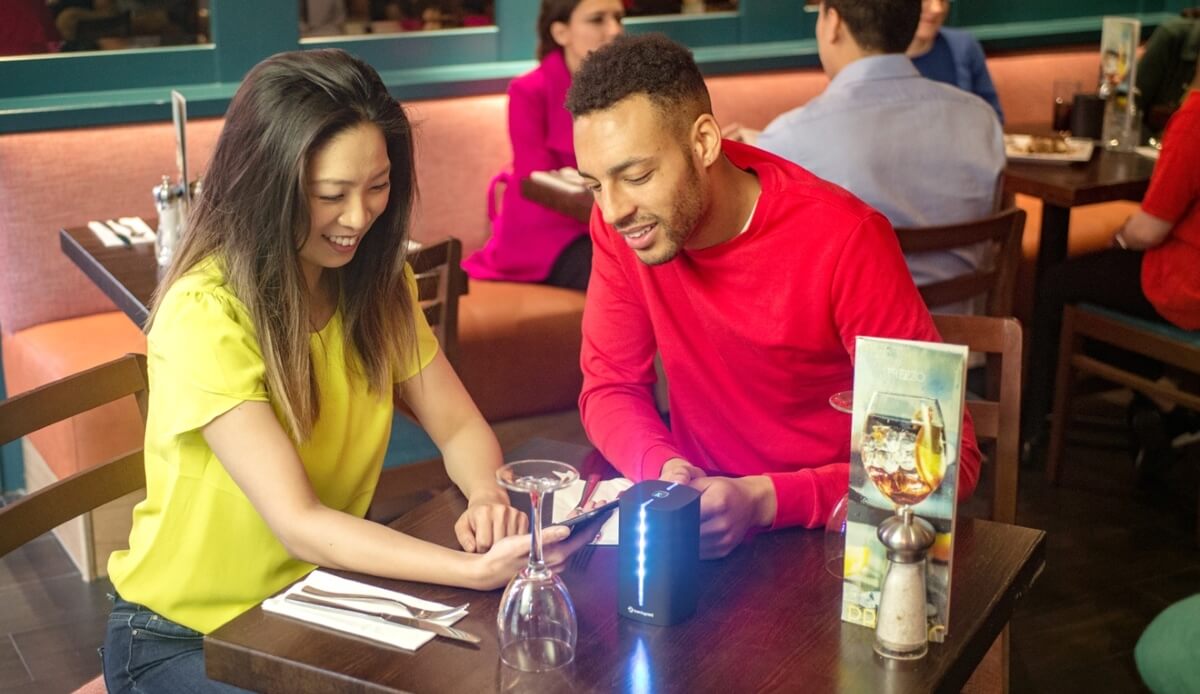 In Europe, Barclaycard is testing out a new tableside device called Dine and Dash that allows diners to pay without having to ask for the bill. To use the system, guests download the Dine and Dash app onto their phones, then tap the device on the table with their phone to register the app with the device. Customers can leave at any point and automatically charge the bill to whatever payment option users have set up. The app allows patrons to add a tip, apply discount codes, and even split the bill. The device — which looks similar to Amazon’s Echo — changes color on the table to denote successful payment, so staff can ensure that the bill has been correctly paid.

Clearly, the move toward automated checkout poses a threat to labor as minimum wage continues to rise. For now, retail executives say the scan-and-go services won’t eliminate cashier jobs — rather, some cashiers will move to other parts of the store, like new online pickup stations. Restaurant executives say mobile payments are freeing up employees to serve more customers, which in turn could lead to a need for more workers. Overall, researchers expect that automation will enhance humans’ role in the workplace, rather than taking them completely out of the picture.

And with any mobile payment handling, data security is also a concern. While Panera’s success with mobile ordering and payments has helped it gain the title of leading fast-casual chain in the U.S., earlier this month, the company admitted a massive data breach on its website that may have affected as many as 37 million users. To keep up with the pace of mobile payment adoption, the financial services sector is constantly working to prevent cyberattacks and increasingly turning to machine learning to detect and mitigate threats. In-store, greater security is offered by NFC-based wallets, which include tokenised credentials and, increasingly, biometric authentication, making them more attractive to both consumers and merchants.

As automation continues to creep into more and more industries, using technology to replace repetitive, tedious tasks such as completing a payment transaction seems not only desirable, but also, inevitable. This is a trend that will only pick up the pace and accelerate as solutions become more intuitive, easy to use, and efficient.