A recap of our FSTEC 2018 panel discussion 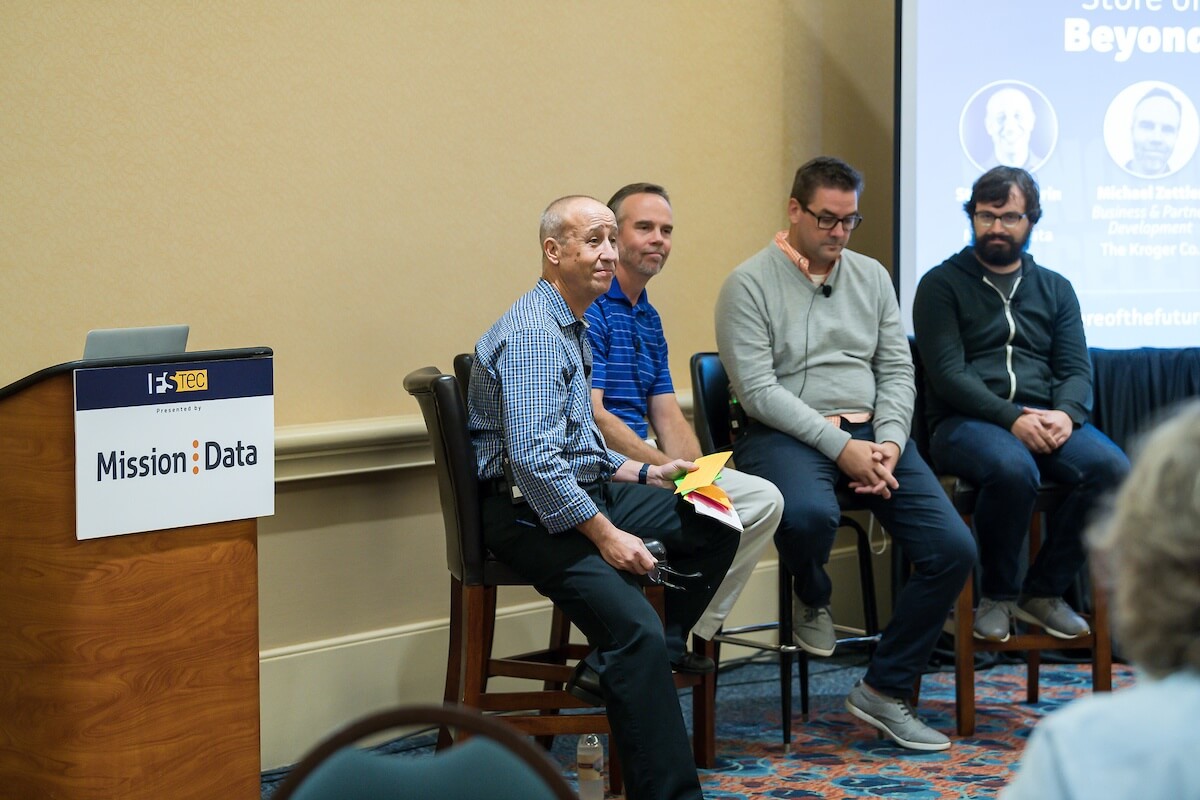 The headlines filter into our inboxes daily: “Blockchain Will Save Retail.” “Why You Desperately Need to Hire a Data Scientist.” “Brick-and-mortar is Dead!”

To cut through the noise and hear which digital solutions operators are actually investing in and planning to investigate, Mission Data recently hosted an Innovation Forum at FSTEC 2018 titled “Store of the Future: Beyond the Hype.” Alongside Mission Data CEO Stuart Gavurin, the panel included Josh Patchus, Chief Data Scientist at CAVA; Stephen Smittle, Chief Operating Officer of Gusto Farm to Street; and Michael Zettler, Business & Partner Development, The Kroger Co.

Clearly, the topic was top-of-mind for many attendees, as the session was standing-room only, and the audience offered engaging questions at the end of the talk. For a full recording of the session, please see Mission Data’s Youtube channel.

To kick things off, Gavurin asked the panel which technologies were over-hyped. Patchus pointed out blockchain and even data science, despite being a data scientist himself. “Really what most companies probably need is not blockchain but a centralized data repository,” he said. “The needs are getting 30 different providers into one data source so you can actually see what’s going on.”

While acknowledging that digital is transforming the way retailers do business, Zettler rejected the idea that there will be no physical store of the future. “There’s hype that in the next five years people will order things and have them delivered, and they’ll just become part of the couch,” he said. On a similar note, Smittle doesn’t expect that the store of the future will look like something from the Jetsons. “There will be avenues for operators to use robotics in a functional way, but I don’t think we’re going to completely dismiss the face-to-face people connection.”

The panel took a deep dive into the current struggle for stores to strike a balance between a digitized, delivery-focused concept and an inviting space that provides a compelling customer experience.

Smittle argued that so-called ghost kitchens — operations meant for delivery only — are still a question mark, even though the physical restaurant is getting smaller and more delivery-oriented. “I think brick and mortar is going to be a combination of robotics, kiosk ordering, mobile ordering, and a limited labor force,” he said. “Some of our stores have upwards of 30-40% of third-party delivery on rainy days.”

For grocery stores, a major initiative is on making the store a destination, which is why Kroger has added more in-store restaurants, wine tastings, and concerts, said Zettler. “Give the customer more of a reason to come in and spend time,” he said.“A lot of people have their community group meetings at CAVA,” said Patchus. “How do we take those folks and the folks who want their food as quickly as possible and compromise the two?” Patchus explained that CAVA began using sensors and data science early in their growth to track guests’ preferences both inside and outside of the stores. 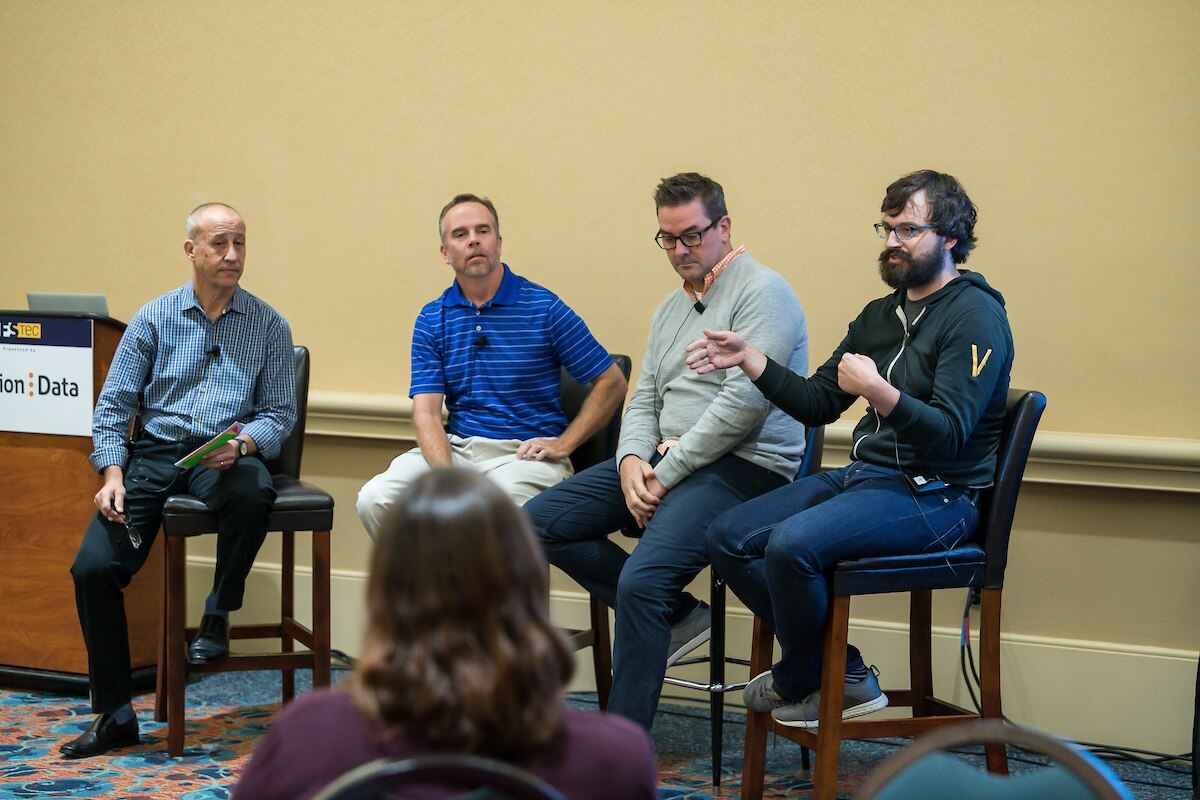 All About the Data

Speaking of monitoring guests, Zettler chimed in: “The day of Big Brother is here. Anybody that is offended by being watched or doesn’t think that we’re going to be monitoring, measuring everything five years from now. Video analytics and IoT are here to stay. The amount of data you get back and what you can do with that is just going to be implied table stakes.”“The younger generation expects you to know what their favorite drink is when they line up because you’ve collected all their data,” said Smittle.

Where Should Companies Begin?

With exciting technologies emerging such as augmented reality (AR), voice interfaces, and cashierless checkout, where should companies invest first? For Zettler, the answer is IoT and data collection. The customer may not know that there are sensors monitoring when food temperatures fall out of range, or when doors are open or closed, but they will benefit by taking home fresher, safer food.

Patchus warned against starting with the technology before the customers. Take Google Glass, for example. “How many people use Google Glass?” he asked, to empty stares and a round of chuckles. He also pointed out that tech enthusiasts build up hype about voice interfaces such as Siri and Alexa, but most people still aren’t willing to use the tech on a daily basis or trust it to order a pizza.

The store of the future — and even the store of the present — must deal with a labor shortage as minimum wages increase and the talent pool is being offered lucrative gigs such as being an Uber driver. Smittle said he’s done an informal poll of drivers in the DC area and they can make $22-$24 an hour, create their own schedules, and don’t have to risk getting injured in a hot kitchen.

At Kroger, to counteract employee turnover, the focus is on optimizing associates to work as efficiently as possible. They use a task management system that dispatches employees to check on conditions only when the store’s sensor system has alerted them that there’s a problem. Kroger also uses machine vision to know how many people are coming into the store so that enough cashiers are dispatched right before the store gets busy.

And while kiosks are being touted as a way for stores to save on labor costs, if they’re not deployed carefully they can be a headache for customers, said Patchus. “Don’t make your problems your customer’s problems,” he said, sharing an example of a kiosk experience that took him 15 times longer to navigate the ordering process than if he spoke directly with a human.

“If you need to be efficient and you need to save money, do it in a way that’s not noticeable to the customer,” said Patchus.