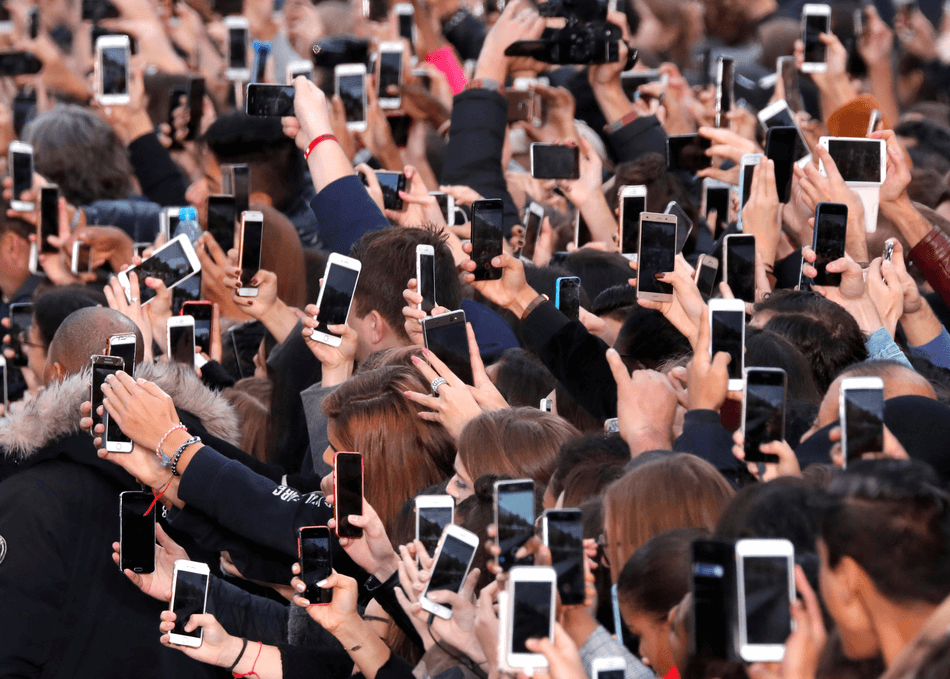 We’re moving through SXSW Interactive at the pace of innovation, are you keeping up? Catch up on our experiences from Days 1, 2, and 3 if you haven’t been following along.

Stu: For me today felt like a Monday at SXSW. [Editor: It was a Monday at SXSW.] I went to only one excellent session that our Marketing Director Selena Ricks would’ve loved, “Finding Signal in the Noise of Social Media.” They discussed how new media and journalists are learning about “fake news” and false sources and how to deal with them. Other than that, I slogged through three other sessions that can best be described as “ungood.” Maybe Todd or Carson can inspire me with some of their highlights.

Todd: Today was jam-packed for me with some pretty good learning and some fun mixed in.

Stu: Sounds intriguing. Want to start with fun or learning?

Todd: Learning. The first session of the day, “Limitless Creativity: How to Design in an AI World,” had some good insights and interesting examples. It wound up being quite rapid for 9:30am, but Jenna Niven, R/GA NY Creative Director, had some interesting correlations between the human brain and artificial intelligence. She also contrasted how the human brain has an aspect of creativity that computers may never have. The closest we can get to limitless creativity is to combine creative humans with AI.

Stu: Kind of matches a session I went to today, “AI: Ready to Disrupt Experience Design?” I went to today. It wasn’t great, but the presenter basically said the same thing. He compared processes used to design cars and car components against humans and the big thing is that AI has no sense of aesthetic and a hard time being creative, but is of value to help creatives and engineers. However, humans have the better final mile touches.

I’m assuming that was a thing you learned. You mentioned fun. Tell me about some fun as I had little. 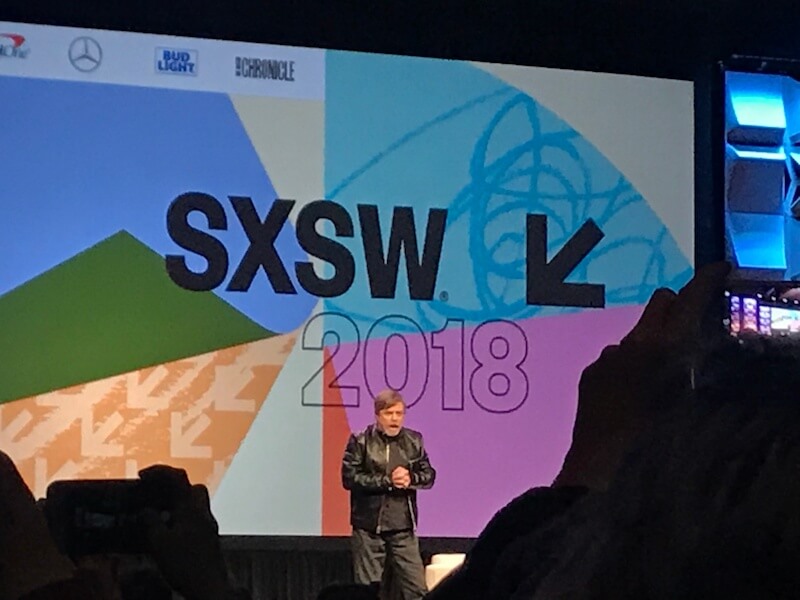 Mark Hamill made a surprise appearance.

Todd: I rarely attempt to get into seemingly popular events where I get secondary access because waiting in line likely means you won’t get in, and if you don’t then you likely can’t get to anything else. But for me, waiting to see Luke Skywalker was worth the risk and it paid off. Thanks to Stu for the tip. The session was “Journey to Star Wars” with Director Rian Johnson talking about the documentary they made during the making of The Last Jedi. After about 40 minutes, they decided to bring out a special guest, Mark Hamill. I’m such an incredible fan of Star Wars that just seeing him and hearing him talk in person literally made my day. My favorite quote from him: “I loved Rogue One because it had 100% less me.” Such a fun and humble guy who truly appreciates the life he has had.

Stu: Well, I think Todd wins the best session of the day, but Carson you went to an IoT workshop. That could be a potential second place. I think you got to actually play with things and make something. Was it fun? What did you make? Any learnings? 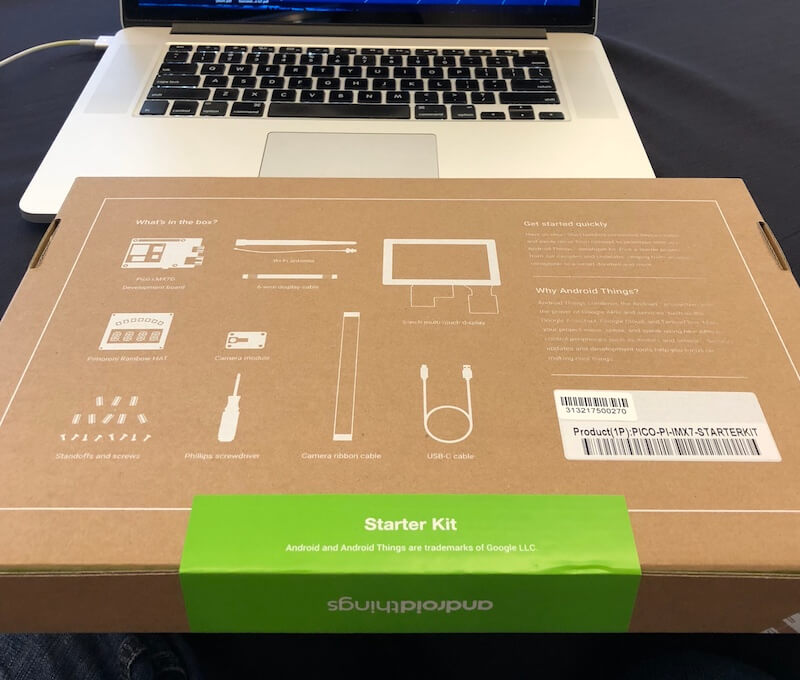 Carson: I went to the “Hands-on with Android Things” workshop and got to play with a NXP i.MX7D Starter Kit. We put together a project that utilized most of the kit, taking a picture of an object using the camera and using a pre-trained Tensorflow model to detect objects in the scene. The result was a display of what was in the scene overlayed on top of the picture that was taken. If you are familiar with developing for any Android device, then Android Things will look very familiar.

Todd: You do a lot of experimenting with hardware. Did you learn anything beyond how this particular kit works? Would you use it again?

Carson: I learned that developing for Android Things is very similar to developing for any Android device. I think that likely works well for a lot of applications, but what I would like to dig into more is if that translates well into a lower power application. I would definitely use it again because it is very approachable and has a lot of support for different peripherals.

Todd: Stu, I hope you didn’t have a true case of the Mondays. Give us a highlight from your day.

Stu: My one highlight was an incredibly engaging discussion with a professor from Columbia University’s School of Journalism and Reuter’s Executive Editor responsible for operations data and innovation. Their focus is to make sure that they can discern credible news and information versus what is currently called “fake news.” I got a few learnings from this. The scariest is that 14% of Americans consider social media the most important source of news. The presenters also called the current era as the “Post Truth” age in which there is little trust and often a lot of misleading information out there.

Todd: Reminds me that I learned yesterday about Facebook’s Top Ten Tips to Spot False News which I thought was good of them to create and encourage people to read.

Stu: Reuters has implemented a tool for its team called Tracer that tracks the sources and various linkages of items through the social networks and provides a veracity indicator so their reporters can gain a sense of what may be coming across their screens with respect to credible information to follow-up on. The professor was teaching his students computational techniques for journalism including insights on how bots worked. He and his class did a study associated with creating a fake social media profile and bought some followers, which were mainly bots. This work led to some real insights into what we consider nefarious behaviors and ended up being the focus of an article in The New York Times. 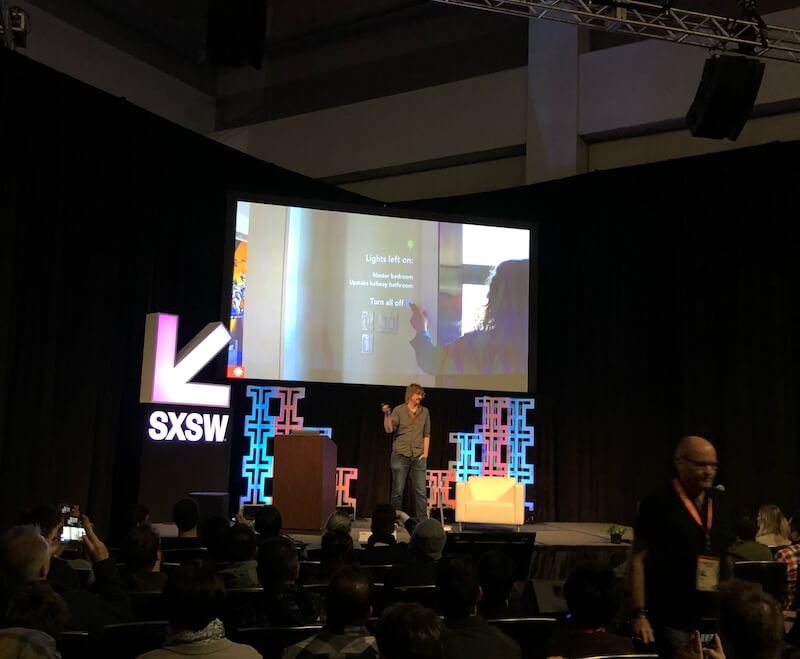 Carson: On a more upbeat note, I had a couple other good sessions, specifically the “Interactive Light: Projection Based Interfaces” session at the trade show theater was really good. The session went over a ton of projector technology and uses that most people wouldn’t necessarily expect, like displaying a calendar on the back of a door as you are leaving your house. Projectors are getting really small, specifically laser-based projectors, and their use in more areas will only grow.

Stu: Thanks guys. That’s a wrap for today. I think I’ll ask you both for some consultation on my plans for tomorrow.